Liz is a growth manager at a mid-size tech startup. 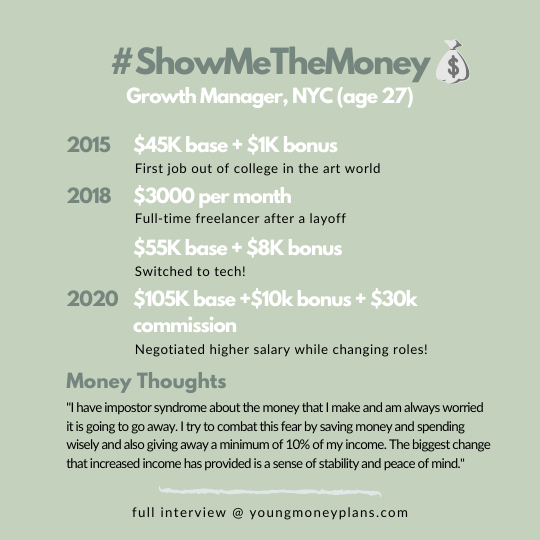 Liz is currently a growth manager (the link between sales and marketing) at a growth stage mid-size tech startup. Throughout her winding twenties, she's switched industries, negotiated her salary, managed student-debt, used money for good, and navigated the controversial world of partner finances.

*Name is altered to protect identity.

What was your first full-time job?

My first full-time role was in marketing for a PR company focused on the art world and based in NYC. My base salary was $45k and I received a $1k bonus. I got one raise while I was there to $47k.

I went to school in New York for art history determined to get a job in the industry. Unfortunately, it is not an industry for folks who have taken out a lot of student loans and I didn't see a place for myself long term. It took me a few years to get my s**t figured out and included a layoff, a few side gigs, and some freelance work but I eventually landed in tech and have been much happier.

How has your career gone since your first job?

I've gone through quite a few salary changes in the last 2 years. Rather than sharing my most recent, it might be helpful to share the bigger picture. I knew I wanted to move over to tech but didn't have the connections or experience to make the jump right away. In 2018, I ended up in a full-time freelance gig making $3,000 a month and also having to cover my own taxes. From there I moved over to my current company in a role that I didn't love but paid slightly better and was super stable.

The first role at my current company (end of 2018) paid $55K plus a $7.5K bonus. I did not know at the time that I was being vastly underpaid for the industry. 3 months in (early 2019), I received a bump up to $65k base. This was based on a few factors but mostly just that I came in too low. Do your research before negotiations. At my one year mark (late 2019), I took on a new role at my company. This time I did my research and received the base salary I asked for ($105k) plus $15k bonus. This spring, my variable compensation was changed to reflect the rest of my team. This means my bonus is slightly smaller, but I received commission on our global sales. All in all, I come out ahead.

How did you decide to switch to tech?

When did you negotiate and how did it play out?

I don't have a strong history of negotiating for myself and only recently have gotten better at it. When I made the jump from $65k base to $105k I was in the middle of changing roles and spoke with a few mentors for advice on how to ask for a raise. One well-meaning mentor told me to ask for less than the market rate, because I didn't have the experience yet. Luckily, I also bounced the idea off a few empowering girlfriends who told me to go for the full amount. In the end, I received the number I asked for without anyone blinking and had an unexpected bonus bump as well. Now I tell my friends to always ask for the amount that scares them and the worst thing you hear is no.

How have salary changes impacted how you spend, save, and/or invest?

Real talk: I have impostor syndrome about the money that I make and am always worried it is going to go away. I try to combat this fear by saving money and spending wisely and also giving away a minimum of 10% of my income. The biggest change that increased income has provided is a sense of stability and peace of mind. I was able to move last minute when my previous roommate got a job across the country, and my partner and I were able to buy a car when it became clear we needed one this summer. Practically, I've been able to fund a large emergency savings account, pay off thousands of dollars of student loans, and save for retirement. I've been able to set myself up for future financial success in a way I couldn't living paycheck to paycheck and that is a HUGE privilege.

How have you managed student debt?

When I wasn't making much money, I only paid the minimum on my student loans. There was also a period of time when I was between jobs and unemployment and my side gigs didn't cover my cost of living. I ended up putting groceries and essentials on a credit card. I worked with a financial advisor to make a plan for how to best tackle my debt on my limited income. I ended up putting my federal student on hold for a few months to prioritize the high-interest credit card loan (I also worked an extra job). Since getting a raise and building up my emergency fund, I've been prioritizing paying off my student loans and have been making extra payments every paycheck to keep the momentum going. I'll have them paid off within the year.

My advice is really to do the work so you know what your options are. It can be scary to look at your debt but knowing the interest rates, what refinancing options are available, and the difference that over-payments make can make a huge difference in how you approach your debt. Making payments whenever I have the cash available helps keep me on track. I enjoy spending money and making an extra payment feels like spending money on myself.

How do you and your partner think about finances?

There is a significant pay-gap between my partner and me -- I make about 3x what he does. We are getting married later this summer. As we've navigated how we split living expenses, we've had to navigate what society tells you to do versus what actually works for us. For us that has meant a shared account for all our expenses that we contribute a percentage to based on our monthly income.

Lots of people tell you that as a woman it is important to keep your money separate, but I earn significantly more than he does. Rather than split everything equally or me pay a higher percentage, I added up all our newly shared costs and then prorated the amount we contribute from our monthly income and then set us both up with direct deposit. I didn't want to put him in a position where he couldn't afford rent or to go pick up groceries because we were splitting 50/50 but now all shared expenses are a none-issue. We just pay out of the joint account. He's focused on paying down consumer debt and student loans. Once I pay off my student debt, we'll review joint saving but I expect it will be a similar approach.

What are your current money goals and what motivates you?

I save 12% of my salary in my 401K. I started a bit late since my first couple of jobs didn't have any retirement options so I've been playing catch up. I pay extra toward my student loans each month ($1,500 - 2,000) and have a goal to completely pay them off in the next 15 months. After that I have a few goals, primarily to invest and buy property. My partner and I would love to buy in Brooklyn where we live but that is a long term goal. We also have land in Vermont near family and plan to build something small on it for weekends. We don't plan to finance that project so it will be built as we can afford the materials. We also plan to do almost all of it ourselves. My biggest savings goal is to have the funds to start my own company in the next few years. I would want to bootstrap it and need the funds to pay myself for at least a year while it gets off the ground.

For more thoughts on negotiation, we at Young Money chat about our personal experiences in this blog post, inspired by our immigrant parents fighting for what they want!

Stay tuned for more on the #ShowMeTheMoney series or contribute. 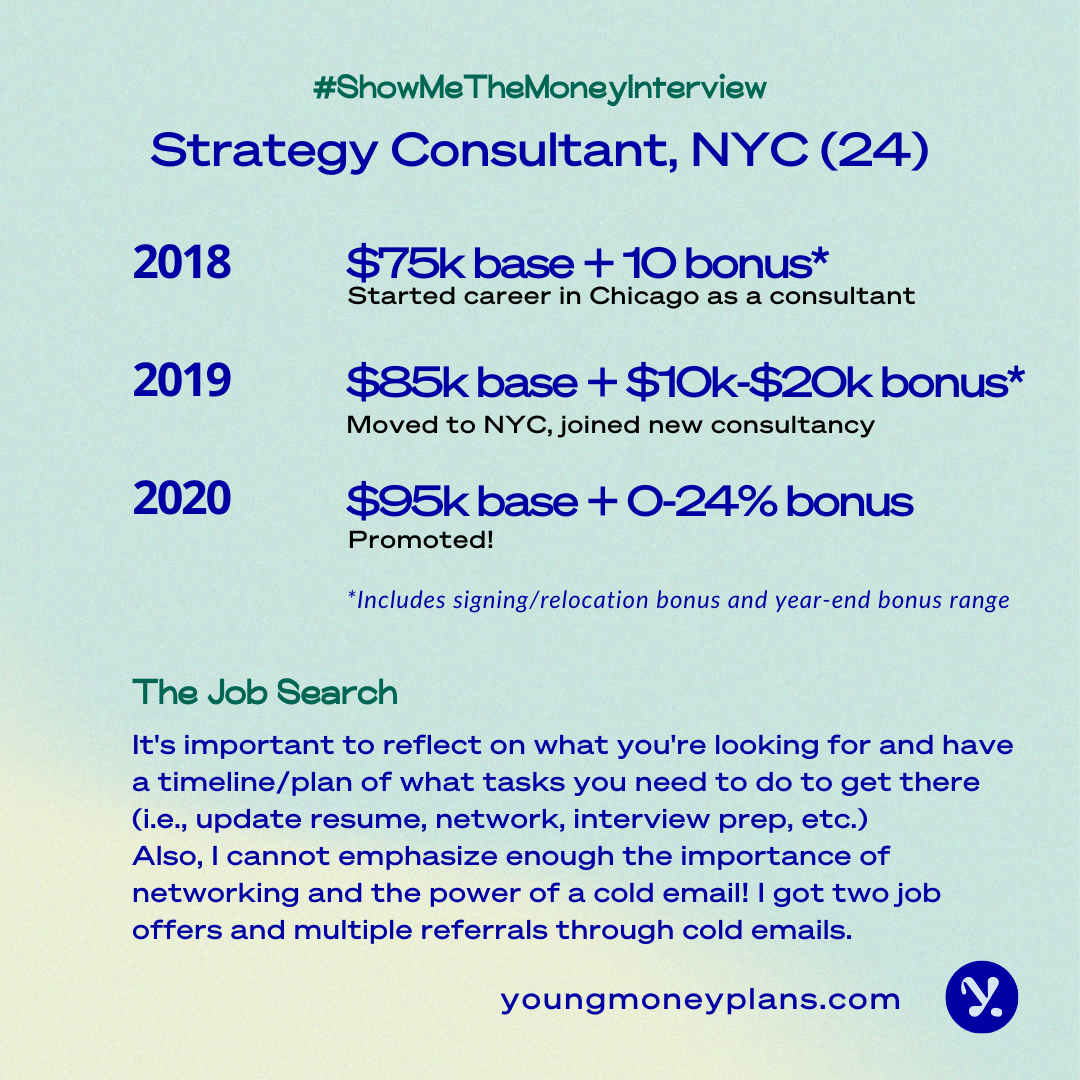 Strategy Consultant Who Moved Back to the East Coast 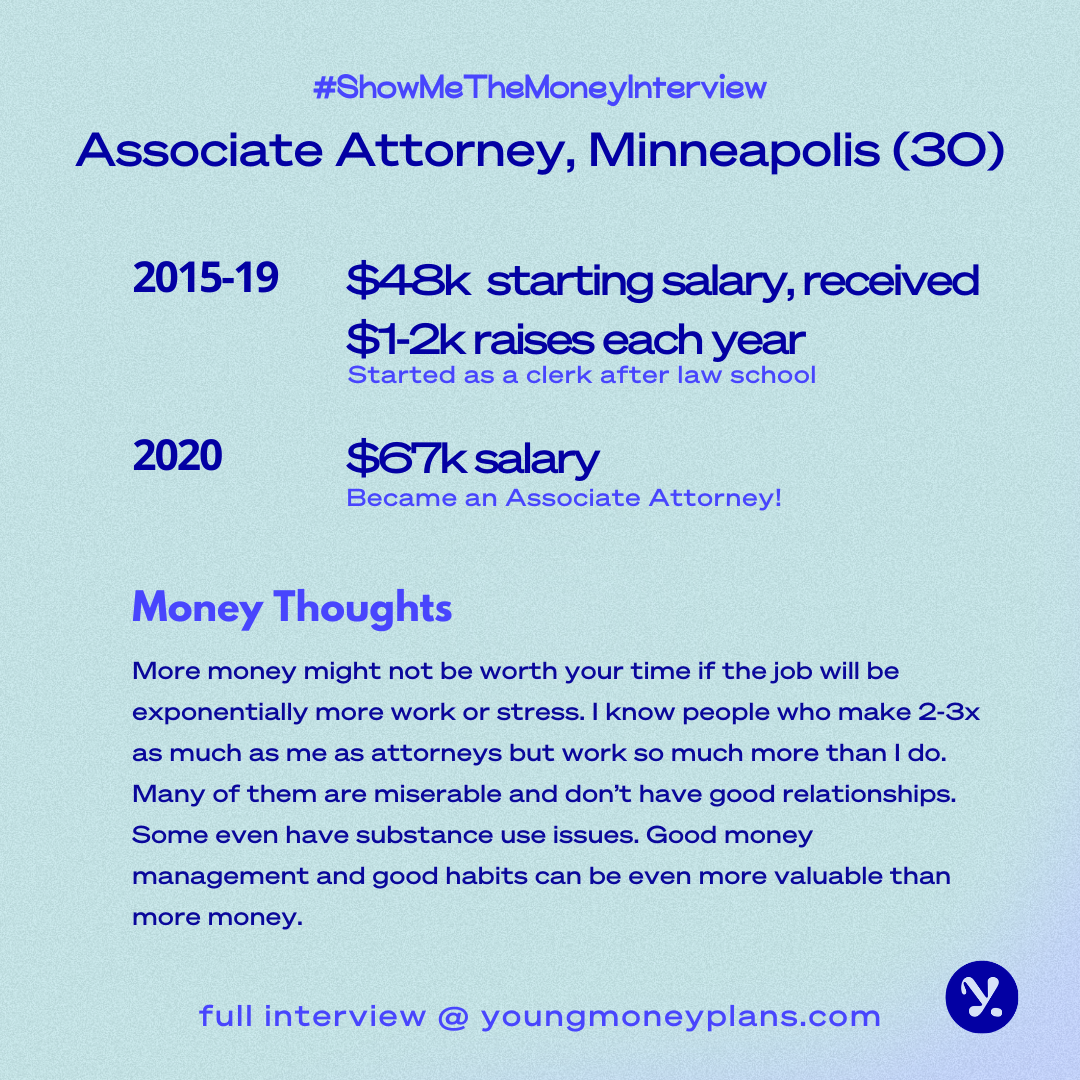 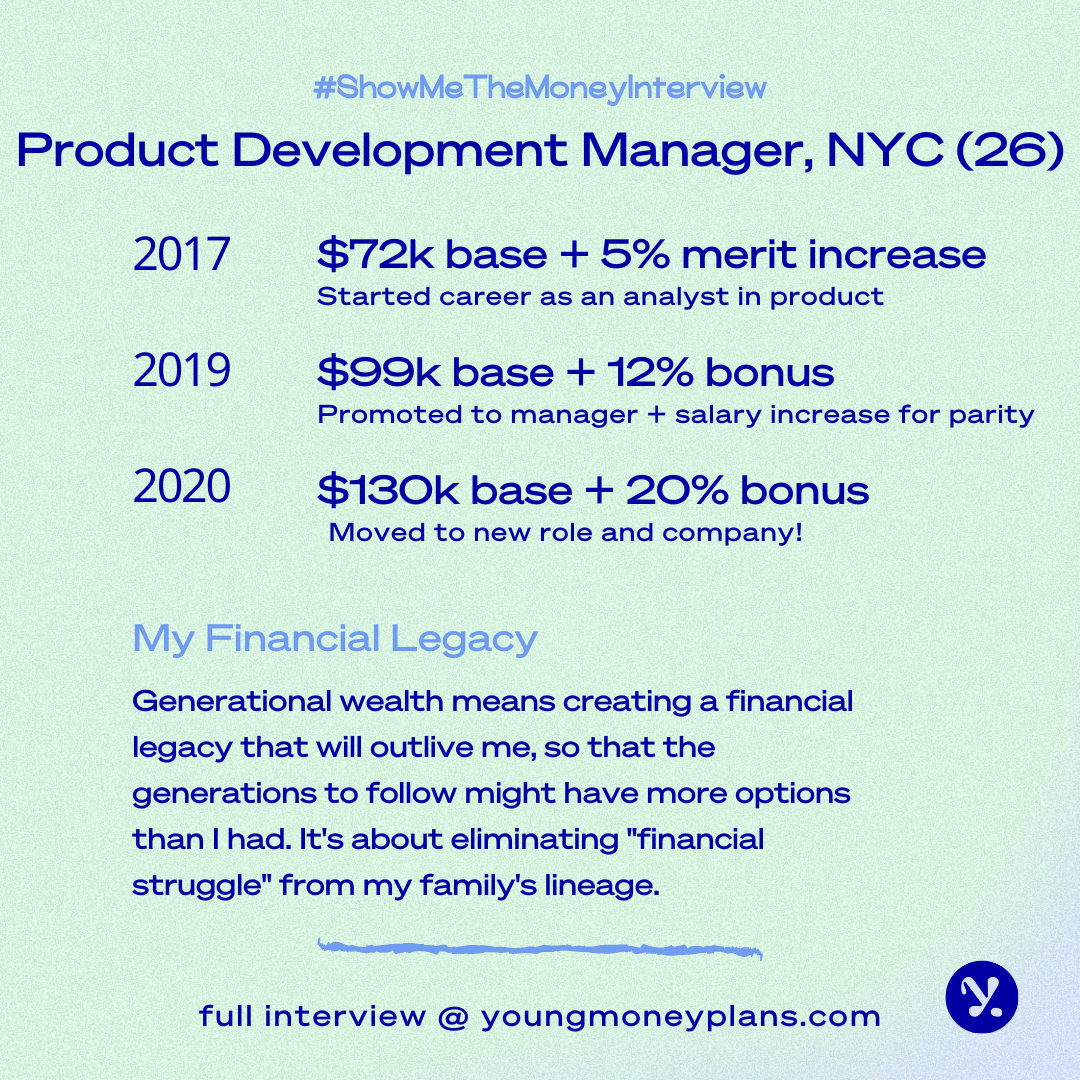 Get in touch and we'll add your questions to our FAQs.